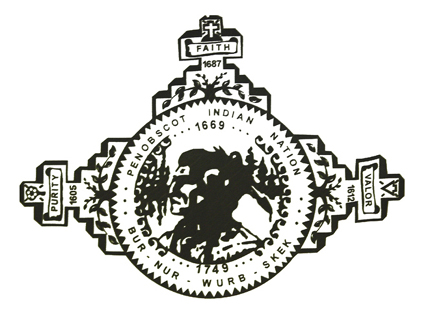 The seal which appears on the Penobscot Nation flag was designed by Senabeh Francis in the mid 1970's. The center of the seal is an un-named Penobscot warrior. Surrounding the warrior is an ornate border which contains three 'tombstones' adorned with crosses.

The top tombstone has "FAITH" written on the cross, and above is a smaller cross. These elements along with the date 1687, the date of the first Catholic mission on IndianIsland, honor our history with the French Jesuits and other clergy of the Catholic Church as well as other denominations. Faith is synonymous with trust and belief.

The left tombstone has “PURITY” written on the cross of the tombstone. Above that is a flower, a daisy which is a symbol for purity. Below is the date 1605. This marks the year when Captain George Weymouth, an explorer for England, kidnapped five Penobscot warriors so he could teach them to speak English, to communicate with them better. Purity signifies our dedication to remain a distinct culture, even in the face of acts like these.

The right tombstone has “VALOR” written on the cross. Above that is an arrowhead. This tool was an important tool in the defense of our culture and people.The date 1612 marks a year during wartime. The valor, meaning bravery in the face of danger, shows how Penobscots have fought bravely for their people.

These three virtues comprise what has been called the ‘tribal motto.’

At the base of each of these tombstones, outside the circle, are three branches representing tribal growth.

Two dates appear above and below the image of the warrior. The top date, 1669, commemorates the war with the Iroquois. The lower date, 1749, denotes the date of a treaty of peace with Massachusetts Bay Colony, ending King George’s War. Together along with twelve double-curves, (representing fire-starters/flint) represents the balance between war and peace and the wisdom of our twelve elected council members.

The serrated edge denotes the sun. We are Wabanaki, a people of the dawn.