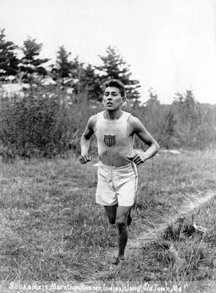 Andrew Sockalexis grew up on Indian Island, Maine. He was ten years old when he started to run. His father had built a track and encouraged Andrew to run. As he grew older, Andrew found other routes and trails to run on. Many times he would run four or five times around an island trail that he trained on.  At a very young age, Andrew was determined to become a marathon runner. Andrew ran all throughout the year. In the winter months he would run on the river ice with spiked running shoes and the rest of the year he trained on the numerous trails that spanned his island home. Andrew was timed at thirteen minutes for a trial that was the distance of 2.7 miles.

As a young man, Andrew had training from Tom Daley of Bangor and Arthur Smith of Orono. Tom Daley trained Andrew until he was 18 years old. In 1911, Arthur Smith, the track coach of the University of Maine, prepared Andrew for the United States Olympic Team tryouts held at Harvard University. He qualified with eleven other runners for the marathon. Andrew participated in the 1912 Olympics hosted by Sweden. The United States marathon team was sponsored by the Dorchester AA team. Andrew was quoted by a newspaper that at all times he was running not only for the United States but also for his own people, the Penobscot. Coach Smith stated to the newspapers that the United States was very confident in their chances of winning the Olympic marathon. 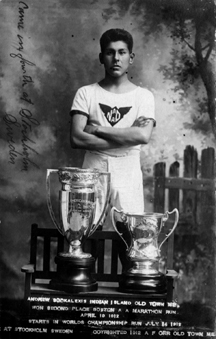 The Boston Post newspaper stated that Andrew was the best hope for a gold medal in the marathon. The strategy for the U.S. team was to hold back in the race and let the 90 degree weather take its toll on the rest of the field of runners. Andrew stated that he waited too long to make his move on the leaders during the race. Andrew finished fourth place with a time of 2:42:07, five minutes behind the winner and only seconds behind the third place finisher. Harold Reynolds, the Boston Post Commissioner, stated that Andrew finished strong and running like the champion he should have been.

When Andrew returned home from the Olympics, he received a royal welcome as though he had won the marathon. He was invited to run in many races around New England. Andrew completed the Boston Marathon in 1911 and 1912, finishing second both times. There was hardly a day that went by that Andrew was not running and he never turned down an invitation to run even though many people advised him to take it easy and rest. Andrew just wanted to run and he had run many miles and beat most of the competition.

In 1916, Andrew ran his last race. It was a 15 mile race from Old Town to Bangor. Andrew’s long time friend and Olympic teammate, Clarence DeMar, brought a team from Dorchester, Massachusetts to run against the team that Andrew compiled from Indian Island. Andrew’s team consisted of Sylvester Francis, Arthur Neptune and Everett Ranco. Prior to the race date, Andrew was suffering from a severe cold and complained of chest pains. Against his doctor’s warnings, Andrew insisted on running the race because he did not want disappoint his good friend Clarence, or the fans and his family who attended the race to watch the two Olympians compete again.

Andrew ran with the bad cold and ahead of the field of runners from the start of the race. As they came to the 12 mile marker, Andrew was ahead of his friend Clarence by a couple of hundred yards and was easily going to win the race.  Andrew crossed the finish line in Bangor and as he stopped running, he started to cough up blood and collapsed.

Soon after the race, Andrew was diagnosed with Tuberculosis (TB), a disease that had plagued his family. Andrew was very sick for three years and in the summer of 1919, he died in the town of South Paris, Maine. The United States Olympic Committee gave the Sockalexis family a grave monument that read: “A Member of the American Olympic Team at the Fifth Olympiad held in Stockholm, Sweden, July 1912.”

Andrew’s running career was short lived but he had run countless miles during his training and competitions in various races. Andrew was only turning 22 years old when he ran the 1912 Olympic Marathon and the Boston Marathon. At the young age of 27, Andrew had died. His legacy lives on within all the young boys and girls who aspire to run and to those who support the young runners from the Penobscot Nation. 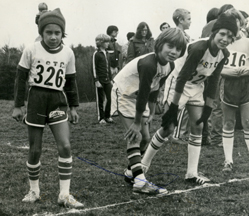 In the 1970’s Michael Sockalexis, a descendant of Andrew, and a fine runner in his own right, began to coach a team from Indian Island. The team, the “Andrew Sockalexis Track Club,” (A.S.T.C.) was active for many years and had some runners who competed on the national level. In the 1980’s the Penobscot Nation honored both Andrew and his cousin Louis, of Professional Baseball fame, by naming the new Ice Arena, the “Sockalexis Ice Arena.” Today the building houses the tribes Bingo operation and still retains the name Sockalexis. In the lobby of the Sockalexis Bingo Palace is a historic display of the athletes Andrew and Louis. Andrew Sockalexis was inducted posthumously in the Maine Sports Hall of Fame in 1984. He was also inducted into the Maine Running Hall of Fame in 1991, and in 2001 he was inducted  into the National American Indian Hall of Fame.

Jean-Vincent D’abbadie the Baron of St. Castin arrives in Maine.