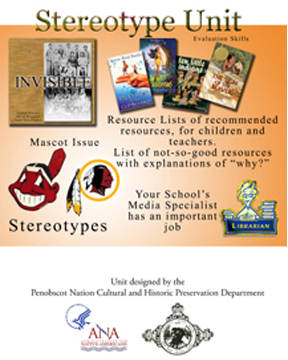 We piloted the stereotypes unit in the Old Town, Maine elementary school library with fifth grade students. As they learned about Native Americans across the United States and in Maine, they were introduced to important resource evaluation skills. The school Librarian/Media Specialist Lynn Lowell Mayer developed a resource list, available as a download.

Note: While this unit was being pilot tested in 2005, an historic event took place in Old Town, Maine: largely in response to the wishes of the Council of the Penobscot Nation, the Old Town school board voted unanimously to remove their long- standing Indian mascot. This important event reflects a shifting climate nationwide on the appropriateness of Indian mascots.